The PAO recently offered our member associations a workshop focused on engaging in effective public relations and crisis communications. Throughout the discussions, there was a consistent theme that emerged: When police service leaders (within the association and the service itself) communicate during a crisis, care needs to be taken so that police employees (sworn and civilian) know they are not on their own.

Whether it is the pandemic, international protests or local calls to defund the police, our members need to know they have the support of their peers and leaders as they manage their way through some pretty volatile times, like we find ourselves in currently. It is human nature to want to have some assurance that what we are doing is important and how we are doing it is indeed the right way.

Similar to the pandemic, protests against police are not just an issue that is happening elsewhere where we have the option to avoid addressing the issue directly. For example, the social media activity in Ontario (see chart below) immediately after the death of George Floyd in the United States specifically highlights how policing is not inoculated by geographical boundaries from negative publicity in other countries. 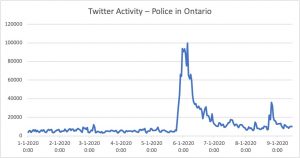 In their study of how police officers in other areas of the U.S. felt after the 2014 death of Michael Brown in Ferguson, Missouri, researchers Justin Nix and J.T. Pickett found that the respondents were directly impacted by the event – even though they did not work in that city or state. The researchers called this feeling a “trans-jurisdictional effect”, in that there was an emotion connected to the events in Ferguson by a majority of police service personnel.

Additionally, there are several studies out of the United Kingdom, the United States and Canada that indicate a trans-jurisdictional effect exists when negative media coverage directly impacts police employees, generating an expectation that police organizational leaders should respond in some form of manner. When police leaders choose not to respond and just hope that the media moves onto another story in due time, evidence indicates the rank and file are more likely to feel they are alone and ‘on their own.’

Finally, police leaders within services as well as those of national, provincial and local associations should avoid going silent wherever possible as it will have a direct impact on the quality of police-public interactions. All of the above studies also indicate that those policing organizations with a strong commitment to communicating effectively during any type of crisis event will, in turn, have police service personnel who feel more effective at the outcomes they produce on the job and they are more likely to have a higher sense of organizational trust.

In a scan of several higher-profile negative media stories within Canada and the United States over the past few years, there are numerous examples of police services outwardly reassuring the public about their safety, or committing to reviewing their internal procedures in response to an issue. However, in conjunction with those messages, what are the police leaders communicating internally to their employees to help them get through what could be a difficult time? Of course, public confidence in policing has proven to directly increase police legitimacy. However, it is equally as important for police organizations to demonstrate confidence in and support for their front-line members as this increases their individual sense of self-legitimacy and performance.